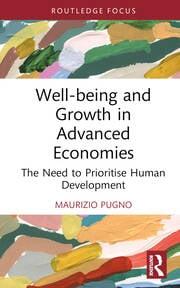 Economic growth is generally regarded by governments and most ordinary people as a panacea for all problems, including issues caused by the COVID pandemic. But this raises an important question: is further growth in advanced economies able to increase well-being once people’s basic subsistence needs are met? Some advanced market economies, e.g. the United States, have exhibited a decline in well-being, both subjectively and objectively measured, over several decades despite seeing economic growth during the same period.

This book provides an original and comprehensive explanation: economic growth, as driven by market forces, induces people, through both the demand- and supply-side channels, to pursue command over more material resources, and this weakens the self-generation of capabilities, putting well-being at risk of deterioration. The book argues, with the support of a variety of evidence, that the challenge can be overcome if governments’ policies and people’s choices pursue, as their ultimate goal, ‘fundamental human development’ on an evolutionary basis: the development of the capability of a typical person to conceive and share with others new purposes, to pursue them individually or collectively, and thus to contribute to building human culture. If such human development is prioritised, it makes people satisfied with their lives and resistant to adverse shocks, and it can even shape the pattern of economic growth. By contrast, if economic growth is prioritised, it tends to weaken and impoverish fundamental human development, and consequently people’s well-being and social cohesion.

With this volume, readers will find an answer to a problem that is both urgent and long-term, both individual and societal. The work makes a substantial contribution to the literature on wellbeing, the economics of happiness, human capital and growth, and the capability approach.

Chapter 3. Why growth in market economies can deteriorate human development and well-being

Chapter 4. Economic growth and human development: which priority in the post-pandemic era?