The Informal Economy Revisited: Examining the Past, Envisioning the Future 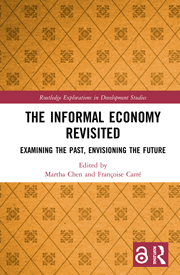 Contributors bridge a range of disciplinary perspectives including anthropology, development economics, law, political science, sociology, statistics, and urban planning and design. The Informal Economy Revisited, which is the culmination of 20 years of pioneering work by WIEGO, also focuses on specific groups of informal workers to provide a grounded insight into disciplinary debates. Ultimately, the book calls for a paradigm shift in how the informal economy is perceived to reflect the realities of informal work in the Global South, as well as the informal practices of the state and capital, not just labour.