coedited by David Bollier, Silke Helfrich, The Commons strategy group and Off the Common Press, 2015 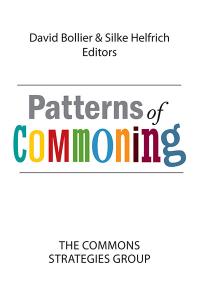 What accounts for the persistence and spread of “commoning,” the irrepressible desire of people to collaborate and share to meet everyday needs? How are the more successful projects governed? And why are so many people embracing the commons as a powerful strategy for building a fair, humane and Earth-respecting social order?

In more than fifty original essays, Patterns of Commoning addresses these questions and probes the inner complexities of this timeless social paradigm. The book surveys some of the most notable, inspiring commons around the world, from alternative currencies and open design and manufacturing, to centuries-old community forests and co-learning commons – and dozens of others.

Margaret Thatcher once championed neoliberal capitalism with the harsh ultimatum, “There is no alternative!” Patterns of Commoning shows in vivid detail that there are plenty of alternatives! We need only understand the robust power of commoning.

Patterns of Commoning follows on the heels of a 2012 anthology of essays, The Wealth of the Commons: A World Beyond Market and State www.wealthofthecommons.org (2012), which offered a panorama of perspectives on commons, the enclosures that threaten many of them, and the productive forces that they can unleash.