The Future of Money: From Financial Crisis to Public Resource 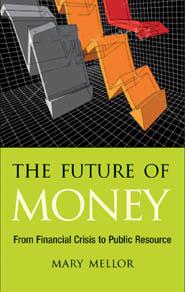 As the recent financial crisis has revealed, the state is central to the stability of the money system, while the chaotic privately-owned banks reap the benefits without shouldering the risks. This book argues that money is a public resource that has been hijacked by capitalism.

Mary Mellor explores the history of money and modern banking, showing how finance capital has captured bank-created money to enhance speculative ‘leveraged’ profits as well as destroying collective approaches to economic life. Meanwhile, most individuals, and the public economy, have been mired in debt. To correct this obvious injustice, Mellor proposes a public and democratic future for money. Ways are put forward for structuring the money and banking system to provision societies on an equitable, ecologically sustainable ‘sufficiency’ basis.

This fascinating study of money should be read by all economics students looking for an original analysis of the economy during the current crisis.