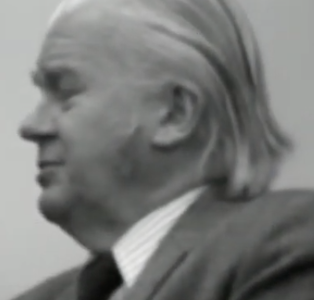 Economist E.F. Schumacher lectured on Appropriate Technology at the Great Circle Center, University of Illinois, Chicago, in March, 1977. Schumacher advocated for the idea that ‘small is beautiful’, i.e., technology should be smaller-scale and economic provision more locally-oriented. This question and answer session with a class of adolescents and young adults, who had been reading the book ‘Small is Beautiful’, probably happened around his lecture.

Many of Schumacher’s ideas about economic and ecological sustainability were informed by concerns around « peak oil » around the 1970s, when many in the industrialized world realized fossil fuels were finite and could run out in several years. While Schumacher’s confidence that « peak oil » was close at hand has been disproved by history, global warming and climate change now bring new relevance to many of E.F. Schumacher’s alternative economic precepts.

The woman who speaks alongside Schumacher is believed to be Mildred Gillingham, a spiritualist and mother of Peter N. Gillingham, Schumacher’s associate and co-author.

30:00 The idea of permanence in economics

49:15 On anxieties about the future