The Zero Marginal Cost Society. The internet of things, the collaborative commons and the eclipse of capitalism 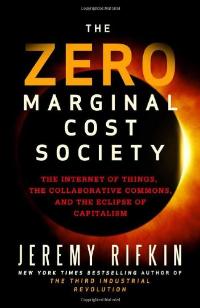 In his new book, Jeremy Rifkin focuses on the value crisis of contemporary capitalism based on the revolution in marginal costs which destroys the profit rate. He concludes that this will mean that the economy and society will re-orient itself around collaborative commons, with a more peripheric role for the market dynamics. In this, Jeremy Rifkin joins the founding charter of the P2P Foundation, which was precisely created in 2005 to observe, study and promote this transition.

To get a better understanding of how this transition could occur, we can do two things. First, we can look at past transitions, such as transition to feudalism, and ask ourselves what this means for the current one; second, we can look at the micro-economy of the already existing commons economy, and perhaps deduce from this the future outlines of the social order to come. Follow me in these two explorations.