Modernising money. WHY OUR MONETARY SYSTEM IS BROKEN AND HOW IT CAN BE FIXED 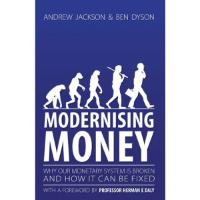 As the title suggests, the book explains why the current monetary system is broken, and explains, in more detail than ever before, exactly how it can be fixed. The product of three years of research and development, these proposals offer one of the few hopes of escaping from our current dysfunctional monetary system. Detailed but accessible to non-economists.