The wealth of the Commons. A world beyond Market & State 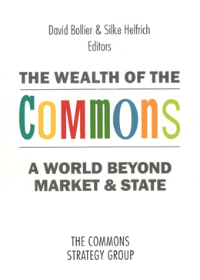 We are poised between an old world that no longer works and a new one struggling to be born. Surrounded by centralized hierarchies on the one hand and predatory markets on the other, people around the world are searching for alternatives. The Wealth of the Commons explains how millions of commoners have organized to defend their forests and fisheries, reinvent local food systems, organize productive online communities, reclaim public spaces, improve environmental stewardship and re-imagine the very meaning of “progress” and governance. In short: how they’ve built their commons.

In 73 timely essays by a remarkable international roster of activists, academics and project leaders, this book chronicles ongoing struggles against the private commoditization of shared resources – often known as “market enclosures” – while documenting the immense generative power of the commons. The Wealth of the Commons is about history, political change, public policy and cultural transformation on a global scale – but most of all, it’s about commoners taking charge of their lives and their endangered resources. It’s about common people doing uncommon things.