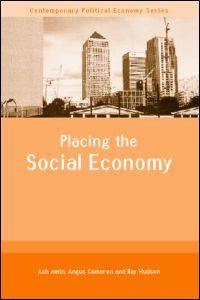 In recent years there has been a great deal of discussion about the social economy and the term ‘the third way’ has attained a level of household recognition, especially in America and Britain. Academics and commentators have debated the usefulness of the social economy as a restraint on capitalist excesses with some arguing that the ‘third way’ is but a poor substitute for a welfare state. This book provides a refreshing and accessible account of real life experience in a social economy.

By focusing on new evidence, this book critically analyses such themes as:

*the policies of New Labour in Britain

*the dynamics of social enterprises in Bristol, London, Middlesbrough and Glasgow.

These critical assessments lead the authors to reflect in the future potential of the social economy and the possible policy changes that are necessary to maximise whatever opportunity the sector provides.