The Transition starts here, now and together 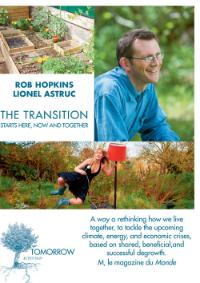 One day in 2005, Rob Hopkins, an ordinary British citizen, started knocking on his neighbors’ doors in the small town of Totnes, where he had just settled in. He was proposing that they come together to organize nothing less than a new, locally based economy. A new model, the Transition Town, harnessing resources at hand: no longer expect food to arrive from the other side of the planet at great fuel costs, but instead create short food supply chains and cultivate all the available land (gardens, rooftops, municipal parks); no longer complain about pollution, but bring federate fellow citizens around a project of local renewable energy cooperatives; no longer rail against the banks and the stock markets, but adopt a local currency that enriches the community. His experience has not only been successful in Totnes; it has spread to 1,200 cities in 47 countries. Each of the Transition Towns are transforming their communities, without fanfare, without outside funding, making them more autonomous and more resilient to the crises looming ahead—a network of oases offering a wealth of solutions.