The Oxford Handbook of Mutual, Co-operatives and Co-owned Business 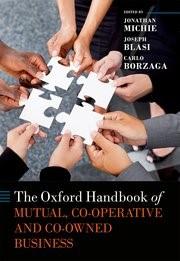 These alternative corporate forms have emerged in a variety of economic sectors in almost all advanced economies since the time of the Industrial Revolution and the development of capitalism, through the subsequent creation and dominance of the limited liability company. Until recently, these organizations were generally regarded as a rather marginal component of the economy.

However, in recent years, they have come to be seen in some countries as potentially attractive in light of their ability to tackle various economic and social concerns, and their relative resilience during the financial and economic crises of 2007–2016.

Main contents of the book