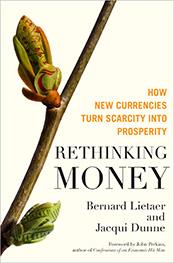 There is a way—in fact, thousands of ways—to stop the seemingly inevitable slide toward global self-destruction. Solutions are already in place throughout the world where terrible problems once existed. The changes came about not through the redistribution of wealth, increased taxation, enlightened corporate self-interest, or government handouts but by people simply rethinking the concept of money and acting from this new perspective. With that restructuring, everything changes.

Bernard Lietaer and Jacqui Dunne explain the origins of our current monetary system—built on bank debt and based on scarcity—and how its inherent limitations drive our ongoing social, economic, and ecological debacles. They then take readers on a fascinating expedition that chronicles stories of ordinary people and their communities solving critical issues that affect us all by using new money systems in tandem with conventional money. These accounts are just the tip of the iceberg—over 4,000 cooperative currencies are now in circulation.

Rethinking Money demonstrates that new currencies can not only resolve money’s inadequacies but also energize new behaviors that can deliver the healthier world we fervently desire. For instance, currencies have been designed to strengthen local economies, create work, beautify a city, and provide health care.

The book provides remedies for challenges faced by governments, businesses, nonprofits, local communities, and even banks. It speaks clearly about a complex subject and promises to strike a deep chord with readers eager to find meaningful solutions to the problems that threaten our security, our prosperity, and our future.