Solidarity Economy I: Building Alternatives for People and Planet 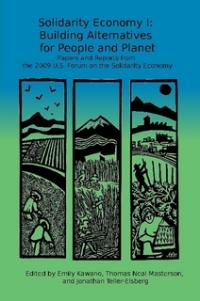 Another world is not just possible. It is being built. So many of us wish for something more—an economy we can feel a part of, not that makes us feel like a disposable cog in a soulless machine. That something exists and it’s called the Solidarity Economy. This kind of economy starts from entirely different premises than those of the ruling model of neoliberal capitalism which enshrines individualism, competition, materialism, accumulation, and the maximization of profits and growth. The solidarity economy by contrast seeks the well being of people and planet. It holds at its core these principles: solidarity, equity in all dimensions, sustainability, participatory democracy, and pluralism. This book is about vision and hope. It provides many examples of real solutions in a wide array of sectors. These practices are currently too isolated from one another. The task of the solidarity economy is to bring these practices together to build a whole and humane economy that works for people and planet.